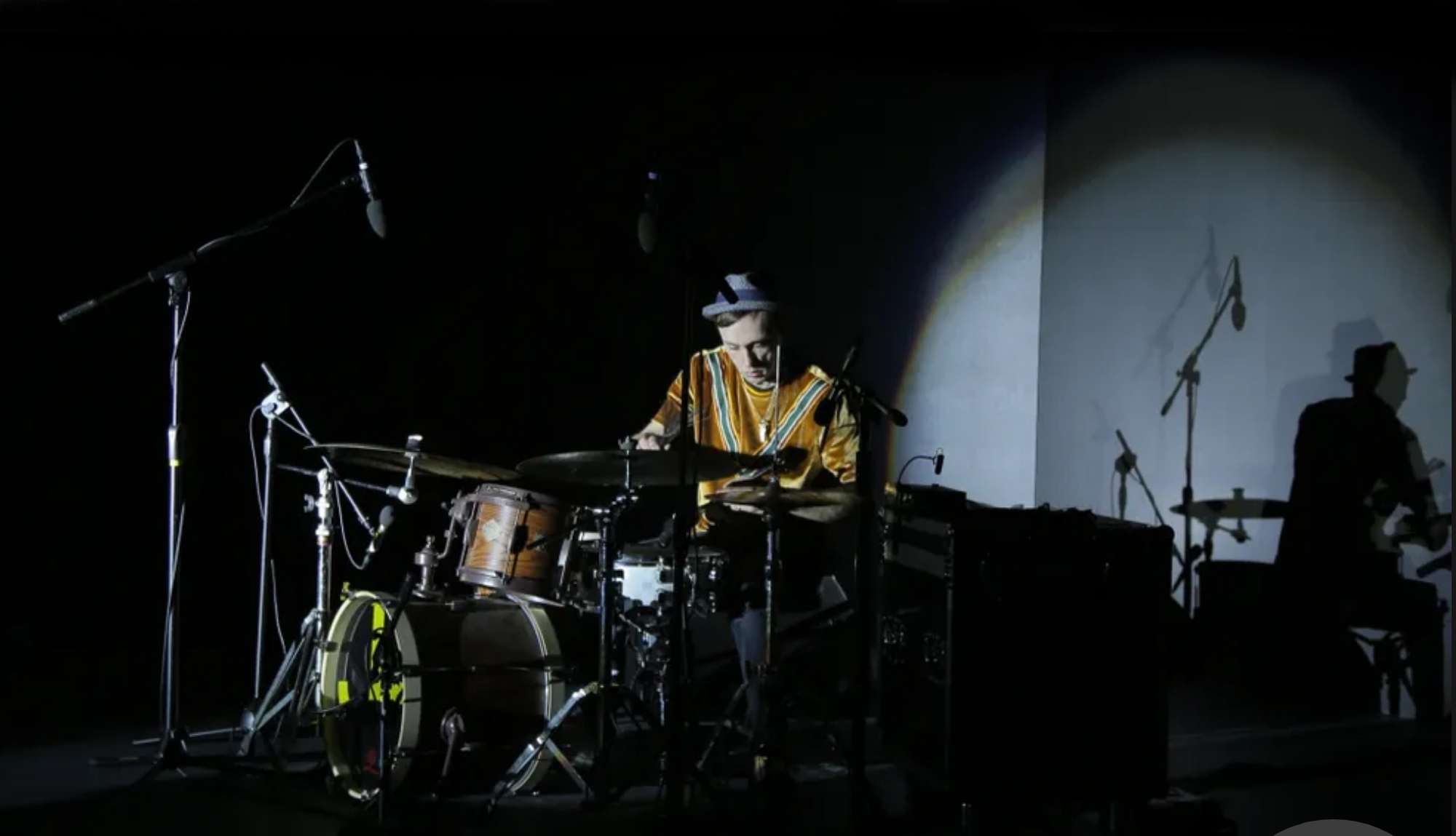 David Lyttle is a MOBO Award nominated jazz drummer, composer and hip hop producer described by Rolling Stone magazine as "one of the best, robust listening experiences you're likely to have all year" and the Independent as "the best in jazz coming out of Ireland in recent times.”

Starting out as a child performer at the age of four with his family band, he first reached a national audience as a jazz drummer in the band of legendary Irish jazz guitarist Louis Stewart, before going on to perform around the globe and collaborate with the arts world's upper echelon, including jazz giants Joe Lovano and Kurt Rosenwinkel, hip hop visionaries Talib Kweli and Soweto Kinch and film great Liam Neeson. David has brought his unique performance concepts to the U.S., where he carried out a coast-to-coast residency in his red Cadillac DeVille, performing jazz for cowboys, UFO tourists, bikers and the unsuspecting public; and China where he spent six weeks as the British Council's Musician In Residence and made a further two visits with his solo show 'Tapes & Drums'. He has performed in the groups of jazz icons of today such as David Kikoski and Jesse van Ruller, and his work has been written about in Rolling Stone, The Guardian, The Times, The Independent and The Examiner.

David Lyttle began performing professionally at the age of four in his folk group the Lyttle Family, playing bongos, bodhran and mini lambeg drum. At eight years old he added drum kit and by ten years old he was also studying cello and uillean pipes. At eighteen he began focusing on the drum kit after taking an interest in jazz. Over the next three years David received scholarships to study at Skidmore Jazz Institute (New York) and the Banff Centre (Canada), whilst also studying for a BMus at Ulster University. After graduating David was offered a government grant to write a PhD thesis at the University of Ulster, becoming a doctor of music in 2009.

David first reached a national audience with jazz guitar legend Louis Stewart in 2006. In 2007 he released his first solo album, True Story, on his newly formed label Lyte Records and would go on to feature a long list of international jazz icons in his bands, including Kurt Rosenwinkel, Terell Stafford, Seamus Blake, Soweto Kinch, Jason Rebello, Greg Osby, Jean Toussaint and Tim Warfield. He has performed in twenty countries and worked with some of the jazz world's most respected artists, including Jonathan Kreisberg, David Kikoski, Jason Palmer, Jaleel Shaw, Jesse van Ruller, Jamie Baum, Michael Janisch, Dave Liebman, Gwilym Simcock, Kenny Werner and Liane Carroll. David also has a long association with guitarist Andreas Varady, who he met at 12 years old and who he was praised by the international jazz press for discovering, before his signing to Quincy Jones Productions at age 16.

In 2012 David released his second album Interlude, which was influenced more by hip hop than straight-ahead jazz. First heard on BBC Radio 1’s Introducing, it helped earn him an international reputation as a producer and songwriter on the rise. Brought to millions by its Channel 4 album advert campaign with HMV, Interlude featured David on drums, keyboards, bass, cello and vocals, alongside some of his heroes, contemporaries and family, including sister Rhea, mother Anne, Soweto Kinch, Jason Rebello and Pino Palladino. David toured Interlude in Ireland, Britain and the U.S. in 2012 and 2013, with highlight shows at the London Jazz Festival and historic Hollywood music venue The Hotel Cafe. In June 2013 David released the dance music single 'Celebrate' with Interlude vocalist Rhea, Northern Irish recording artist Duke Special and the percussionists of Beat Carnival, a Belfast arts organisation where David was the 2013 Musician-In-Residence. The track was playlisted by the majority of Ireland's radio stations.

David's third album Faces was released in March 2015 on Lyte Records under the label's new distribution deal with Universal. It featured his collaborations with hip hop visionary Talib Kweli, Grammy winning saxophone giant Joe Lovano, Irish music star Duke Special, British vocalist Cleveland Watkiss, family members Rhea Lyttle and Anne Lyttle, and jazz artists Jason Rebello, Jean Toussaint, Michael Buckley and Tom Harrison. It was recorded in New York, London, Dublin and Lyttle's country studio in Co. Armagh, and quickly commanded diverse international attention in the media from Rolling Stone in the U.S. to Japanese radio giant J Wave. BBC's Laverne Laverne, RTE Radio 1's John Creedon and Jazz FM were among the album's champions closer to home and Faces quickly became David's most critically acclaimed album to date. Following live dates in Ireland and the UK he was nominated for a MOBO Award for Best Jazz Act in September 2015 and in October 2015 was nominated for an Urban Music Award. Also during 2015 David was Musician-In-Residence at the Nerve Centre, Derry, as part of the city's legacy initiative following its designation as UK City of Culture in 2013. The residency was primarily about collaboration and included the roots album Say & Do with Northern Irish singer/songwriter VerseChorusVerse, formerly of And So I Watch You From Afar, which went to No. 1 in the Amazon UK blues chart in November 2015. David's nomination in the MOBO Awards for Best Jazz Act was a major breakthrough and led to a busy touring year in 2016 with his trio, including dates throughout the UK and Ireland, and in Austria, Germany and Holland. He was also Artist-In-Residence at the MAC, Belfast, with Moving On Music, for three months, acting as a mentor to emerging Northern Irish jazz artists.

In 2017 David carried out an ambitious coast-to-coast U.S. artist residency funded by the Arts Council of Northern Ireland's Major Individual Award. Traveling 5000 miles road trip in his red Cadillac DeVille, he performed for cowboys, UFO tourists, bikers and the unsuspecting public in an attempt to understand what people really think of jazz. The project was sponsored by Yamaha drums and Donegal craft soft drink McDaid's Football Special, which David chose as his official tour drink. He also vlogged exclusively for the MOBO Awards' YouTube channel and had coverage from NPR, BBC and KUNV Las Vegas, who interviewed him at various stages of his journey. Later in 2017 David's spent six weeks in Suzhou, China, as the British Council and PRSF's Musician-In-Residence. He collaborated with Chinese tradional musicians, produced the studio track 'Summer Always Passes' and released a weekly special edition of his Arts and Recreation podcast called Tapes From China.

In 2018 David made appearances in eight countries with his original music trio featuring Scottish pianist Steve Hamilton, his standards trio featuring Kurt Rosenwinkel and Michael Janisch, and in European guitar icon Jesse van Ruller's trio. He visited China twice with his 'Tapes & Drums' show, which features solo improvised drums alongside a taped Mandarin account of his experiences in China in 2017. He carried out a residency in New York funded by the Jerwood Foundation during which he recorded citizens of the city's thoughts on change. These tape recordings were used for 'Tapes & Drums, New York' which David filmed for YouTube and also performed live. Following this, David was commissioned by Falcarragh Winter Jazz Festival in Donegal to created an Irish language edition of 'Tapes & Drums'. Titled 'Tapes & Drums as Gaeilge', it featured poems written by local children on the theme of home. Between August 2018 and summer 2019 David performed 80 dates bringing jazz to new Irish audiences, including many remote island communities, featuring talented up-and-coming Irish jazz performers. This work has led to the growth of Jazzlife Alliance, a new arts organisation under David's artistic direction.

From November 2019 until the arrival of Covid-19 he performed in Egypt, Lebanon, Israel, Thailand, Vietnam, Malaysia, Singapore and Jamaica. During lockdown, David collaborated with film great Liam Neeson in a much-publicised reimagining of Van Morrison's 'On Hyndford Street', as part of Hot Press magazine's celebration of the music legend at 75.

In late 2021 David resumed his international travels and in 2022 performed in much of Europe, along with Turkey, Egypt, Tunisia and Morocco. Through Jazzlife Alliance he founded Northern Ireland‘s first jazz improvisation scheme, Jazz Juniors, and he has been performing concerts closer to home with these talented youngsters, aged 10 to 17. He also released several hip hop projects, including the ‘Christmas At Home’ beat tape.